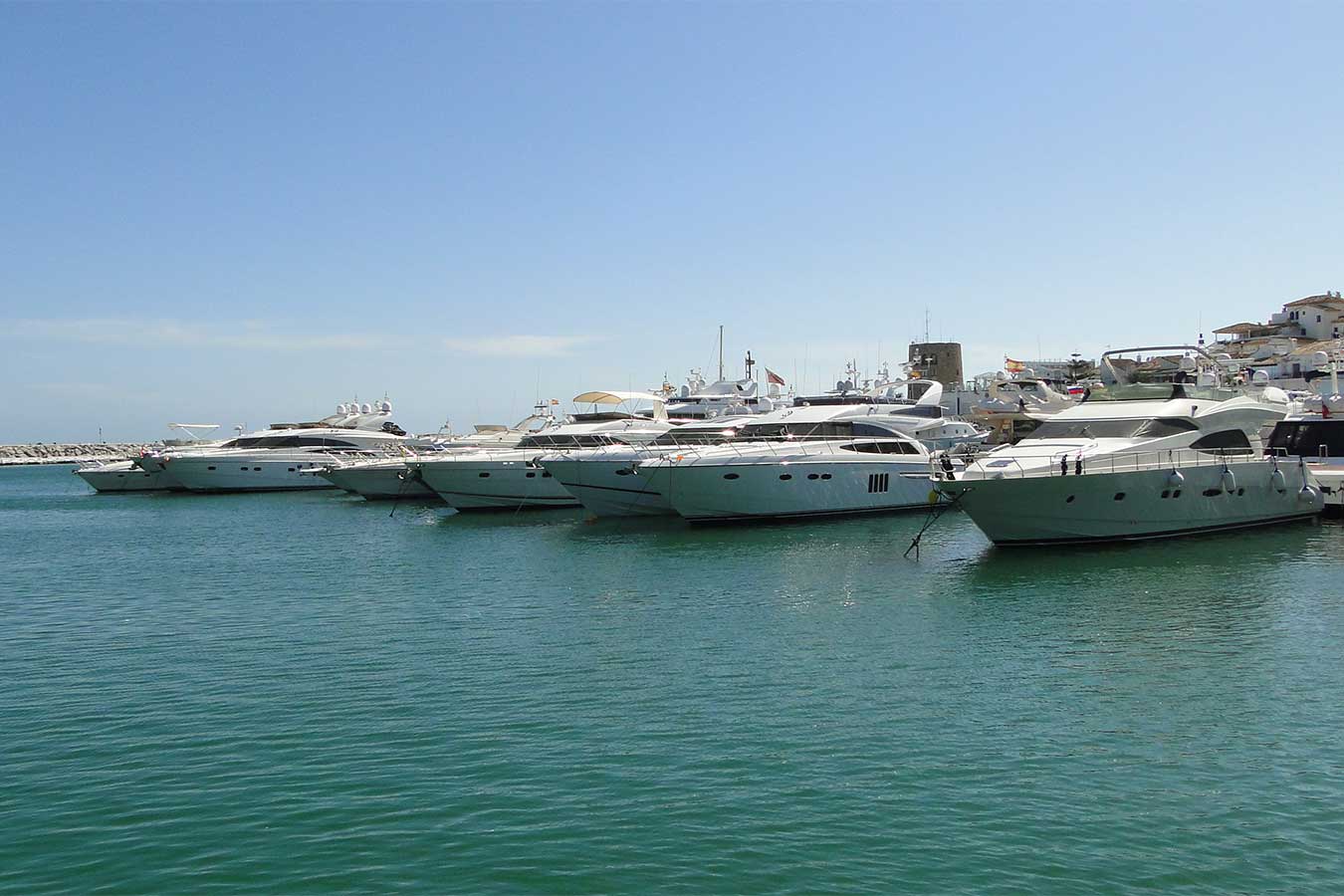 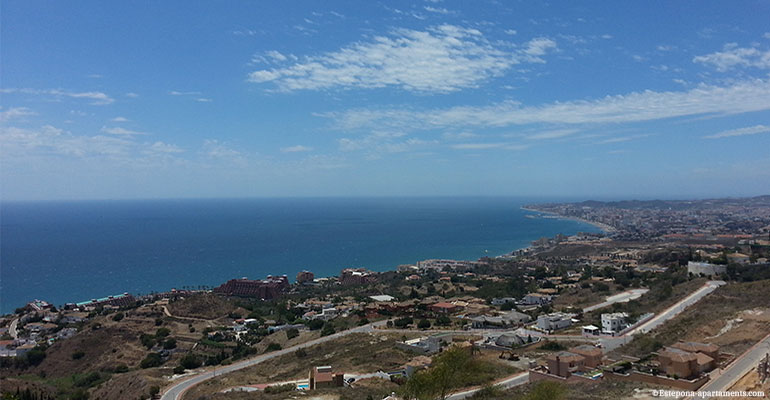 From Sotogrande to Marbella. Marinas

The least changed section lies closest to Gibraltar, the Spanish authorities are trying to prevent building on the very edge of the waves.
Where the road returns to the coast, near the mouth of the Rio Guadiaro, the artificial harbour, Puerto Sotogrande has been built.
The are eleven yacht harbour in the 200 km. between Sotogrande and Almuñecar, on the Granada coast.

The best know of these, Puerto Banus, only 20 kilometres from our Apartments in Estepona, close to Marbella, acquired a reputation in the seventies as the playground of the rich and wicked.
They are still there, judging by the huge yachts, so huge that they seem to overhang the jetty. But for most of the visitors, Puerto Banus consists of arcades of fish restaurants and luxury boutiques.
The harbors which have been build since, are similar, though smaller, and because theuy have failed to achieve Puerto Banus notoriety, have more charm.
Puerto Duquesa, 10 kilometres north-east of of Puerto Sotogrande is a good example, also know as the best kept secret on the Sunshine Coast.
Estepona most westerly of the Costa del Sol swollen fishing villages, now a large town, has so far to avoid too many high-rises and remains Spanish with an old quarter of narrow streets and tapa's bars. 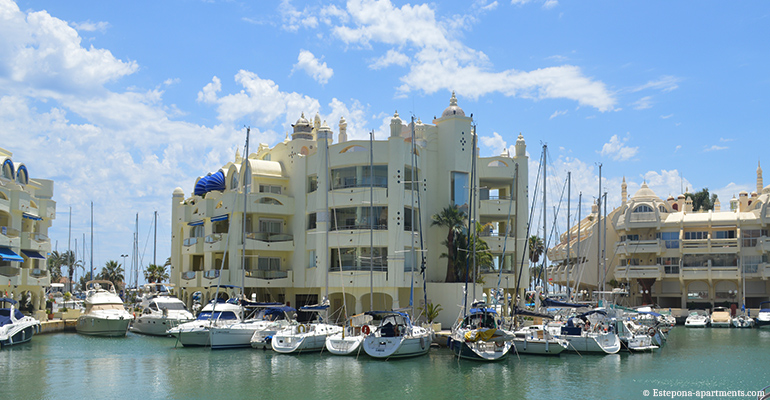 Only 45 kilometres from our apartments in Estepona, Ronda, encircled by mountains, riven by the deep fissure of the Tajo, was one of the first small Spanish cities to earn a place on a tourist map.
Coming from Estepona and San Pedro de Alcantara, you first encounter the Barrio de San Francisco which is rather like a small mountain village picked up and deposit under the city walls. The most striking building, reached trough the Moorish Almocobar gate is the fortress like church of the Espiritu Santo.
Winding up the hill into the old city, a small and interesting Museum, Museum of Bandits, the first motor able turn on the left leads into the Plaza de la Duquesa de Placent, a charming square with cypresses. The square is flanked by the Town Hall form the 18th Century, and by a 19thCentury boy's school on the site of the Moorish Fortress. Not far is the Palacio de Mondragon, a grand town house with a stone Renaissance facade, other points of interest are Casa del Rey Moro, the Bullring (the oldest one in Spain), the Palacio del Marques de Salvatierra, the Roman Bridge, the Arab Bridge and the Arab Baths. 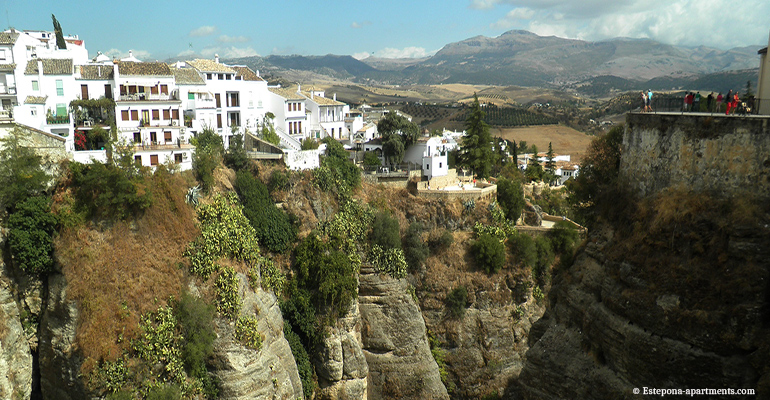 Marbella, 20 kilometres east of Estepona may be swollen out of all recognition, its main street a jam of east-west traffic, but at its centre old town survives of narrow white traffic free lanes.
At the centre of this is its show-piece, the Plaza de Los Naranjos, planted with orange trees and overlooked by the 16th century Casa del Corregidor, home to the tourist office, and one of the town's few old buildings.
On a hot summer night this square, set form side to side with ding table, lit by an orange glow, becomes one vast open air-restaurant, and can be delight even hardened Costa watchers.
Puerto Banus, the famous Marina of Marbella, for many, is nothing more than a display of affluence and ostentation, where snobbishness runs riot amid bottles of expensive champagne, pleasure boats dozens of metres long and lively nightclubs. 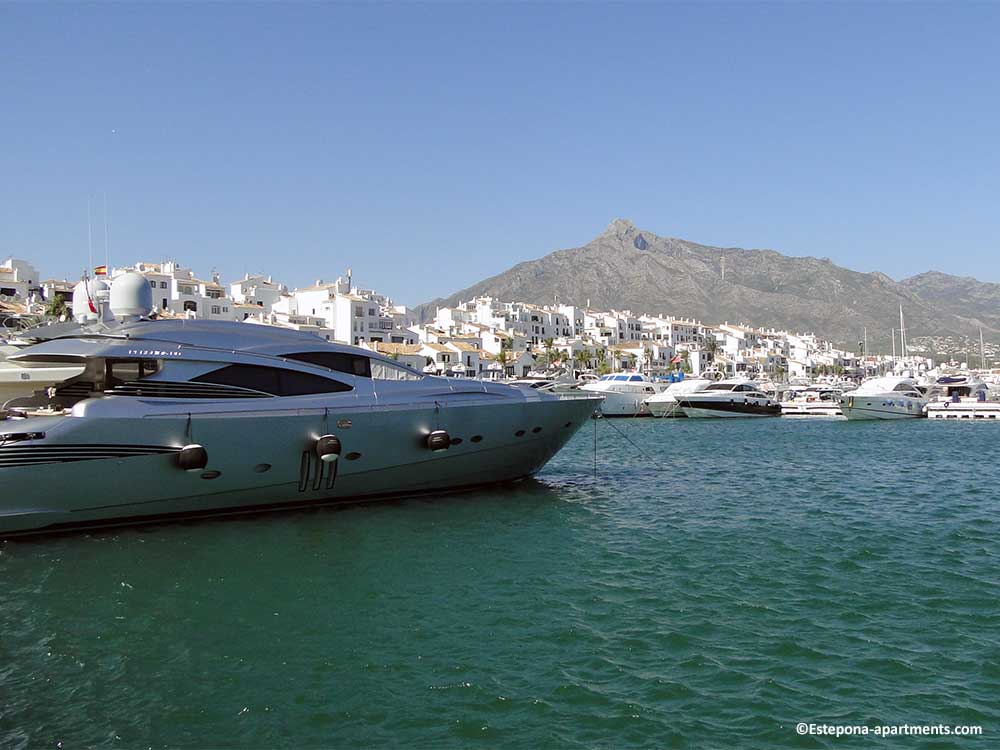