Estepona How to Get There.

Estepona By Road The N-340 / A7 (Duel carriageway) and the A7-P (Motorway) cross the municipality running parallel to the coast for more than 21 Km. A regular bus service connects with all the centres of interest of the Costa del Sol, cities of Andalusia and Madrid.
Estepona By Train.More or less inmpossible. The nearest main line train stations are those of Algeciras which is 50 Km away and Malaga. A local train service is available from Malaga International Airport to Fuengirola 53 Km away. Then you have tu use the local bus service.
By Air. Malaga International Airport lies 70 Km. away with regular flights to and from all the main destinations in the world. Gibraltar airport is situated only 45 Km away.
By Boat.The excellent installations of Estepona Marina can harbour most yachts and boats. The international port of Algeciras is 50 Km. away, with a ferry line to Morocco and also continents. The International Port of Algeciras is 50 Km away, from where passages are available to North Africa.

The most ancient remains found in Estepona date back several thousands of years into the past, into prehistory, the Neolithic, the Copper and the Bronze Age. Amongst the numerous Phoenician and Roman settlements, the ruins on the Guadalmansa Estuary are particularly noteworthy and might belong to the Roman town of Salduba.
The town of Estebbuna, the forerunner of the current Estepona, was founded in the 10 Century during the reign of splendour of the Caliphate of Cordoba.


Places to visit in Estepona 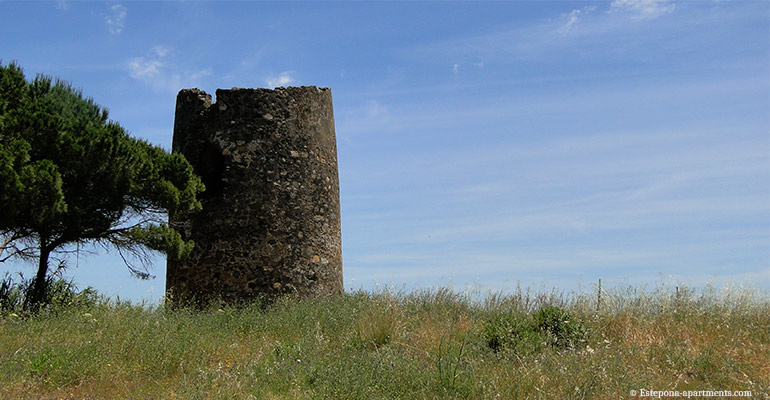 El Nicio Castle.The ruins of a 9th Century fortress, from which the walls and several towers remain.
The Clock Tower.The tower dates back to the Arab period during which it was the minaret of a mosque.
The Watchtowers.Distributed along the length of Estepona's 21 kilometres of coast, there 7 Watchtowers of Muslim and Castilian origin, testimony to a method of defence which lasted well into the 19 th Century.
The Ruins of the Castle of Saint Louis. The ruins are remaining of the Castle built on the orders of the Catholic Kings at the beginning of the 16 th Century.
The Church of Our Lady of Redemption. Built in the 18 Century, the church was originally a tertiary Franciscan monastery.
The House of the Marquees of Mondéjar.Built during the 18 Century. An interesting example of aristocratic architecture.
The Bullring. Opened in 1972, its asymmetric design by the architect Juan Mora Urbano, makes this bullring the only one of its kind.